I was in Las Vegas during the shooting

I was in Las Vegas during the shooting on Sunday night.

I’m taking a break from my launch to share what happened this week, now that I’ve had time to process it.

I had been in Las Vegas since last Wednesday speaking at Carolin Soldo’s “From Passion to Profits” live event at the gorgeous Bellagio hotel. I had been posting photos on Facebook and Instagram over the past 5 days starting with our (incredible) pre-event helicopter ride that landed in the Grand Canyon all throughout Carolin’s beautiful event, so lots of people knew we were in Vegas.

On Sunday night, Scott and I had gone to dinner at a tapas restaurant at the Aria hotel, just 2 hotels over from the Bellagio. We made an early reservation because I was eager to have an early night and to just come back to the hotel to watch the 2-hour season premiere of “Shark Tank”. I was tired after the 3-day conference and speaking on stage and whooping it up in Vegas for several days. We finished dinner at about 7:45pm ET and walked back along the Strip to our hotel. We stopped and took pictures along the Strip (as we had been doing all week).

We had been walking on the Strip just 2 HOURS before the horrible shooting began.

We got back to our room, ran into a cute gal from the event and chatted with her for a bit, and then went up to our room to watch TV. Our room was on the backside of the Bellagio, away from the Strip. Scott heard sirens at about 10:30pm, but by 11pm we were asleep.

Little did we know the hotel had been on lockdown the entire night.

On Monday morning I was awoken at 4:30am PT.

I kept hearing my phone chime to tell me I was getting texts. At first, I rolled over and tried to go back to sleep but then Scott’s phone rang. We both sat up, bleary-eyed, and wondered why everyone was contacting us so early in the morning. It was his mother asking if we were okay.

I grabbed my phone and began looking through the texts from people…from my mother, from my dear friend Christina Neuner, from my caring team members Heather Jernigan and Crystal Honeycutt, from my niece Jesse who is away at college, from my sister Jill, from my best friend from high school Michelle Shone.

We turned on the TV and quickly realized that a huge tragedy had taken place a few hotels away from us.

My jaw dropped. It was surreal watching the LOCAL news station reporting on such a horrific event happening right there in their own town…just a few hotels down the street from where we were staying. I couldn’t believe it.

I knew that I needed to post on Facebook right away to let everyone know we were safe. Here’s what I wrote: 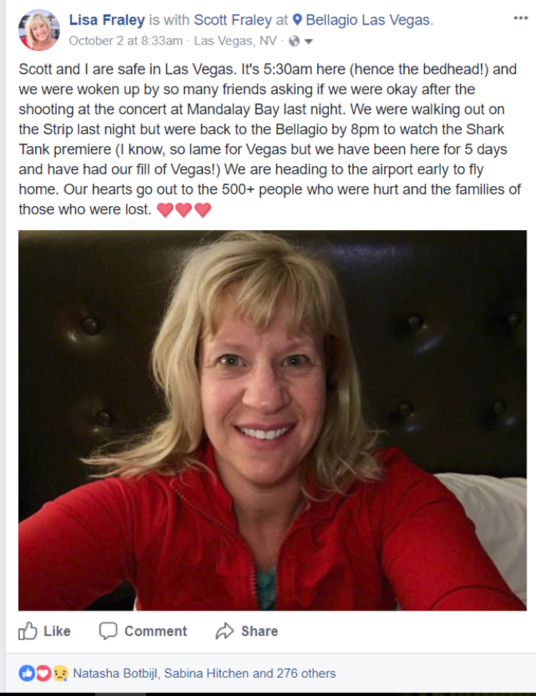 We had been planning to get up at 6am PT to go to the airport by 7am PT to catch our 9am PT flight. Immediately, Scott and I both instinctually said to each other “we have to leave now.” We heard the Strip was closed and the cabs and Ubers were all being re-routed so we had no idea how backed up traffic would be considering we were also leaving during the Monday morning rush hour.

We showered quickly and called for an Uber.

Our Uber driver arrived and she told us she hadn’t turned on the news in the morning so we were filling her in as she selected an alternative route to the airport that avoided the Strip. However, as we were driving up the ramp to get onto the highway at 6:45am ET, we all looked to the left where the Strip was and we could see tons of police cars blocking the road.

We could see the Mandalay Bay hotel out the car window with the two windows blown out.

The whole building looked gold and was glistening in the early morning sun, except for the two windows that were blown out by the shooter. I felt my heart sink. Hard to believe such horror had come from those two windows just 9 hours before.

As we walked through the terminal towards our gate, I told Scott that I thought it was odd that I had been completely OBSESSED with watching “Shark Tank” the night before. I’m a fan, for sure, but we were taping it at home and there was no real reason why I was so focused on watching it.

Now, I am certain that my ridiculously strong urge to watch “Shark Tank” was the Universe’s way of protecting us.

A number of my friends who were also staying at the Bellagio, Chantelle Adams, Marlo Ellis and Natasha Botbijl, had been down the Strip at the Stratosphere and got caught up in the chaos on the way back to the hotel. They had a horrifyingly scary night not knowing if there was more than one shooter as they ran down the street and were rerouted into the Mirage where they stayed in a stranger’s hotel room until 3am watching the news.

When they finally felt safe to return to the Bellagio, they could see that people had overturned chairs and tables, leaving their purses and cell phones behind as they had run for cover. My heart went out to them when I learned that they had experienced so much stress and anguish throughout the entire night.

Throughout my entire 5-hour flight home, the vast majority of the plane – including me! – was glued to the TV watching MSNBC, CNN and other news stations for the latest updates. When our plane landed in Boston, Scott and headed to the baggage claim to get our suitcases (because I can never pack light!) and we met with a barrage of TV cameras and news reporters. It wasn’t exactly our desire to be on TV, but we wanted to help the reporters get at least some info. Lots of other people were interviewed too. 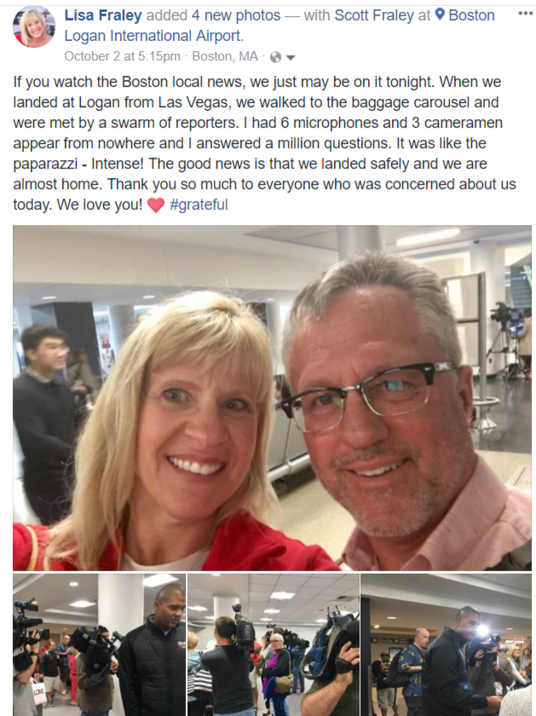 We finally made it home by about 9pm ET, completely mentally and physically exhausted, and able to start processing what had happened. We were grateful to be back home in our own house so we could finally unwind.

Like all of us in this country (and around the world), our hearts have gone out to the 500+ victims and the families of those who were lost in the face of such a senseless, heartless and cruel act. It’s astounding to me that this could happen to so many innocent people who had just come to Vegas to enjoy a joyful country music festival. It’s utterly heartbreaking.

I know that, like you, Scott and I will be sending healing love to the victim’s families and celebrating the many acts of bravery and service from the Las Vegas police, first responders, regular people and concert-goers who came to each other’s aid during such a horrific nightmare.

With so much love to you,