Clearing up the confusion about non-disparagement clauses – Part 1

There is sooo much confusion about non-disparagement clauses in contracts.

Today I’m bringing out my Teacher archetype with a #minilawschool lesson about non-disparagement clauses and the purpose behind them.

The timing for this topic is perfect as we have such increased awareness these days around using our voices on social media and other places.

First, let me say that using our voices on social media and speaking out for what we stand for is important.

IMPORTANT: Please know in this message I’m talking about LAW, not politics.You may or may not agree with what I’m sharing that our government and courts have decided recently or in the past about free speech… and that’s okay. I come from inclusiveness and Love first. All of you are welcome here.

It’s also important to note that while I can always see both sides of any issue (because that’s EXACTLY what lawyers are trained to do!), from a legal and personal standpoint, I am sensitive to people, particularly people of color or other minorities, who have felt and been oppressed, and historically not able or permitted to have an equal voice. My parents were civil rights activists, and my whole life I’ve learned and believed that oppression of ANY group of people is wrong and should not be tolerated. I went to law school because I believe in the principles of equality and justice under the law…for minorities…and for everyone. I’ve discussed my core values previously on my blog and in my podcast 2 years ago here. Issues of systemic and individualized oppression are extremely important, and you are entitled to your own opinions and political beliefs, but they are not going to be the focus or discussion of this particular message. Rather, the focus going forward is on helping you to understand the LAW itself – not to discuss political opinions about the Law. If that’s amenable to you and you’re able to separate Law from Politics, keep reading. If not, you may want to stop reading here. With that in mind…

Part of what makes the United States unique is the freedom of speech we have in this country under the First Amendment.

Generally speaking, we have the right to share our opinions and speak freely.

However, the “right to free speech” isn’t completely unfettered in the United States…nor should it be.

There are legal limitations on free speech, especially when speech causes potential or actual harm to others.

For decades, Congress, state legislatures and the courts have determined that our free speech rights are limited when connected to:

There are LOTS of situations in life and business where, legally, we can’t just say whatever we want… on social media or otherwise.

One area that comes up a lot in business is non-disparagement clauses.

It’s legal language in a contract which says that one person won’t say anything negative about the other person, and sometimes, also their business.

When are they used?

They also often are used in a Client Agreement for 1-on-1 services between a coach and client.

What’s the purpose of a non-disparagement clause?

The intention of a non-disparagement clause is to not speak ill of someone else so that conflicts may be resolved privately, not publicly. 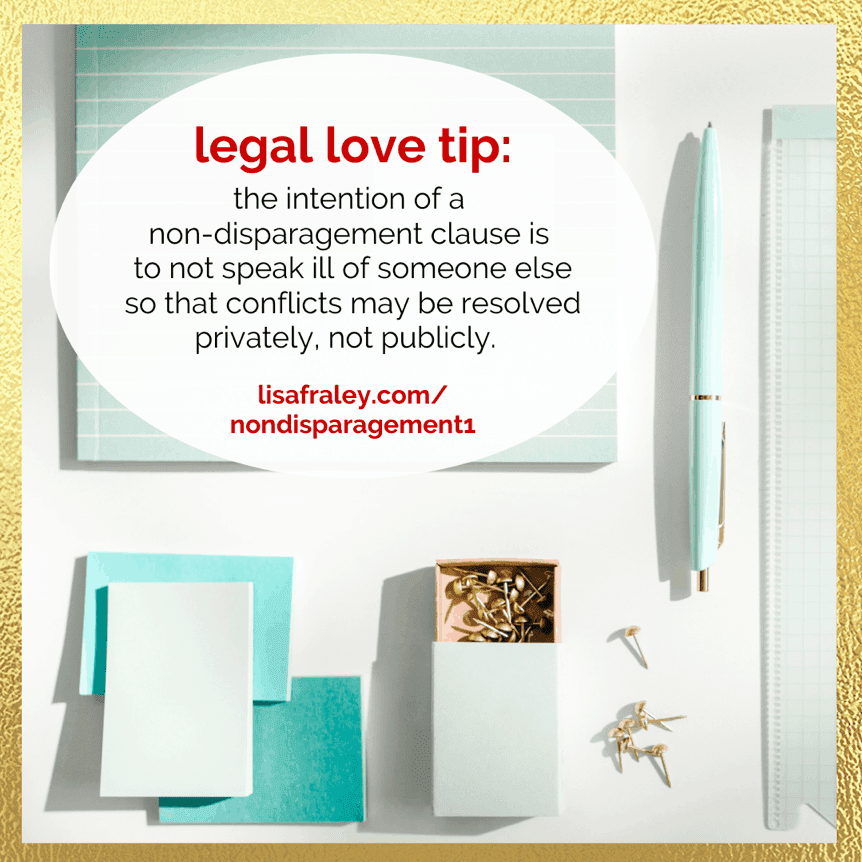 Why do coaches use them?

They’re designed to deter clients from harming the reputation of the coach by saying bad things about the coach, or airing grievances on social media.

Instead, the desire is for the coach and the client to agree from the start that they will resolve a conflict directly with each other – amiably, intentionally, privately, and professionally.

Like through a phone conversation where both sides can be heard and both sides can explain their positions to work it out. Or, by email to come to a positive resolution about a misunderstanding.

But, not to comment publicly to other people or on social media in a way that will be hurtful to reputations or businesses.

Let’s face it… when people are upset, sometimes they post things on social media in the heat of the moment when fear or anger emerges.

They may be legitimately angry and want to warn others not to use a coach. Or, they may be just sounding off and letting off steam which later they regret.

It’s pretty evident that many people use social media to vent, to express anger, to say whatever they want without a lot of fear of consequences. It’s not usually the way people resolve conflicts peacefully. Maybe it should be, but as of now, it’s just not often used that way.

So isn’t a non-disparagement clause unfair to a client?

You might be thinking, “A non-disparagement clause sounds kind of harsh and restrictive. It sounds like a client is being told that they can’t talk to their friend about a coach they don’t like, or post on social media to let other people know not to work with that coach. That doesn’t feel fair.”

It’s understandable that it can feel unfair, for sure. It can feel lop-sided or oppressive to not be able to use your voice if you’re angry about a coach, or the coach didn’t deliver the value you were promised in a program, and so on.

This may surprise you, but non-disparagement clauses aren’t intended to stifle your voice without your consent.

Note that the key words in the above sentence are… “without your consent.”

Non-disparagement clauses are NOT unfair… and here’s why.

Non-disparagement clauses are legally allowed because people are FREELY AGREEING in advance to not make negative comments later.

Most people don’t realize that when coaches and clients contract together, under the law, both sides are equal. Both have the same power and the same rights.

No one is above the other. Each is personally and voluntarily contracting for a service in exchange for payment. Legally, the coach and the client are equals.

People who contract can voluntarily CHOOSE to restrict their speech and not make negative comments about the other.

Just to be clear, when we’re talking about a coach and a client contracting to work together…

We’re talking about two individuals/companies contracting to work together privately in a certain way, which includes one (or both) parties AGREEING to restrict their speech.

Now, even if it might FEEL a bit one-sided to agree to a non-disparagement clause, know that it’s still a client’s CHOICE whether to sign the document.

The client has options:

2. The client can choose to walk away from working with the coach at any time prior to signing the contract.

No one can force a client to agree to a non-disparagement clause.

Ultimately, it’s the client’s choice whether to agree to a non-disparagement clause and to work with the coach.

Remember, the whole goal of a non-disparagement clause is to help clients and coaches resolve disputes privately, maturely and confidentially.

It’s not to stifle the voice of the client. It’s an agreement entered into voluntarily to direct the voices of the client and the coach to each other to address any problem head-on – not sideways through social media.

So with that, you now know your #minilawschool lesson on the basics about non-disparagement clauses and their purpose.

Tune in next Monday for Part 2 when I’ll share a recent question from one of my own clients about non-disparagement clauses and the recent Supreme Court decision about a teenage girl sharing her voice on Snapchat.

Have a question about non-disparagement clauses? Feel free to comment below. We’re always happy to help make the law easier to understand with lots of Legal Love™!

Learn the #1 way not to lose money with this free guide.

(and receive free legal tips, offers and business insights via email!)
We collect, use, and process your personal data in accordance with our Privacy Policy.
You may opt out at any time.