Clearing up the confusion about non-disparagement clauses – part 2

Last week I wrote Part 1 about the confusion around non-disparagement clauses and the intention behind them to promote positive resolution of conflicts.

If you haven’t seen that post, take a second and read it HERE. It’ll help you understand the context for today’s #minilawschool lesson in Part 2 of non-disparagement clauses.

Recently a client reached out to me with this question:

“I’m curious about the non-disparagement clause in a contract stating people cannot ‘say anything negative’ about a coach. How does that mesh with the client’s First Amendment rights, especially in light of the recent win for the student who sued the school over what she said on social media?”

Doesn’t the recent Supreme Court decision about First Amendment rights contradict the use of a non-disparagement clause by a coach?

IMPORTANT: Just as I shared last week, please know in this message I’m talking about LAW, not politics.You may or may not agree with what I’m sharing that our government and courts have decided recently or in the past about free speech… and that’s okay. I come from inclusiveness and Love first. All of you are welcome here.

It’s also important to note that while I can always see both sides of any issue (because that’s EXACTLY what lawyers are trained to do!), from a legal and personal standpoint, I am sensitive to people, particularly people of color or other minorities, who have felt and been oppressed, and historically not able or permitted to have an equal voice. My parents were civil rights activists, and my whole life I’ve learned and believed that oppression of ANY group of people is wrong and should not be tolerated. I went to law school because I believe in the principles of equality and justice under the law…for minorities…and for everyone. I’ve discussed my core values previously on my blog and in my podcast 2 years ago here. Issues of systemic and individualized oppression are extremely important, and you are entitled to your own opinions and political beliefs, but they are not going to be the focus or discussion of this particular message. Rather, the focus going forward is on helping you to understand the LAW itself – not to discuss political opinions about the Law. If that’s amenable to you and you’re able to separate Law from Politics, keep reading. If not, you may want to stop reading here. With that in mind...

In case you didn’t hear, there was a recent court case where a teenage girl made some comments on Snapchat while she was off-campus (not on school grounds). She used the middle finger and swear words on Snapchat about her public school, softball, cheer squad, and more. The school district suspended the teenage girl from cheer for a year, but she and her father sued her school, the Mahanoy School District, and won.

The case made it all the way to the US Supreme Court. The Supreme Court ruled that the First Amendment didn’t allow schools to punish students for negative or vulgar comments made off of school grounds for a variety of reasons. (Note: This is my brief, non-verbatim synopsis of the case. For more, you can read the actual Supreme Court opinion right HERE.)

Under the First Amendment, she won. She was allowed to make disparaging remarks about the school and cheer squad, etc. on social media.

My client basically wondered, “Doesn’t this Supreme Court ruling mean that clients can say whatever negative comment they want about their coach on social media and they’ll be protected under the First Amendment too?”

The answer is NO.

In the case of the teenage girl, the First Amendment was in play because the situation was with a public school district which is a PUBLIC ENTITY.

Coaches and clients are not public entities like schools. They are PRIVATE entities.

The First Amendment only applies to PUBLIC entities when it comes to restricting the freedom of speech.

The First Amendment does not apply to private individuals or companies, like coaches.

As I shared last week, a coach and the client are voluntarily signing a contract to work together. They can choose to have a non-disparagement clause in their contract that they both agree to.

Historically, the law says that private persons may contract together and make any agreement that they wish (so long as both people are not minors, they’re of sound mind, the contract isn’t unconscionable or made under duress, or a few other circumstances.)

In other words, coaches and clients can agree in the contract to not say bad things about each other, including on social media. 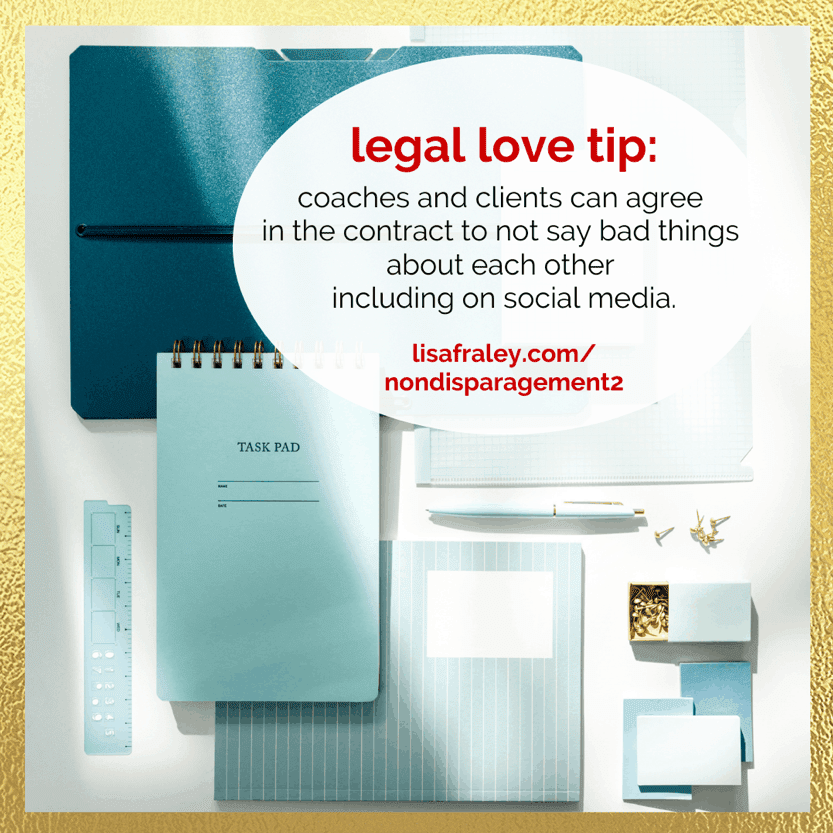 Why is this okay?

Because when people sign a contract, it’s assumed that:

Legal Love™ Tip: Even if a client claims they “didn’t see or understand” part of a contract, it still applies to them since the legal presumption is that they saw and agreed to it by virtue of signing the document. This is one of the reasons why it’s important to have a lawyer review any contract that you’re signing, so you fully understand what it’s saying BEFORE you sign it.

Still, even though a non-disparagement clause may be legal and not violate the First Amendment, it might make you uncomfortable to have one in your Client Agreement.

It might not sit well with you that you are telling your client to not use their voice. I get it. Everyone’s different. Even if it is legally permissible, it still might not feel 100% good to you.

Here are 2 things you can do which might help you feel more comfortable using a non-disparagement clause in your contracts:

1.You can make it a mutual non-disparagement clause.

Often, non-disparagement clauses are one-sided. It only protects the person who drafted the contract – which is usually the coach – and not the client too.

Sometimes, it can feel more comfortable for a coach if the non-disparagement clause went BOTH ways to say that neither of you can bad-mouth the other one.

What you can do: You can revise the language to say that NEITHER your client NOR you can say anything bad about each other. This is called a “mutual non-disparagement clause” (as we say in the law), so neither of you may make comments publicly or privately that harm the reputation of the other.

Sometimes, reading a non-disclosure clause without any context can feel harsh or cold. It may feel better to add in some language explaining WHY you’re including this clause in the contract.

What you can do: For example, you can add a line which says: “Should you have a concern or issue during the course of our work together, we agree to address it privately to seek resolution in a productive and positive way, rather than to speak to others or post on social media.”

Here’s My Legal Love™ Gift to You:

If you’ve purchased my DIY Client Agreement in the past, which does have a non-disparagement clause already included, I am happy to:

(1) make it a mutual non-disparagement clause for you
(2) add the public policy reason, or
(3) to do both.

Just email me and let me know if you want (1), (2) or (3), and I will provide you with the language at no cost and tell you how to insert it into the template. Totally for free. It’s my gift to you.

I hope this Part 2 #minilawschool lesson was helpful for you in further understanding non-disclosure clauses, why they’re legally allowed, why the First Amendment doesn’t apply to them, and what you can do to make them more comfortable to use (including my free gift for you!)

Here’s to better understanding non-disparagement clauses as a business owner – huge kudos to you!

Learn the #1 way not to lose money with this free guide.

(and receive free legal tips, offers and business insights via email!)
We collect, use, and process your personal data in accordance with our Privacy Policy.
You may opt out at any time.